Dartmouth College and The American Archive of Public Broadcasting (AAPB) are pleased to announce a new collaboration in which AAPB’s Online Reading Room of public television and radio programming will now be accessible through the Media Ecology Project (MEP) at Dartmouth. END_OF_DOCUMENT_TOKEN_TO_BE_REPLACED 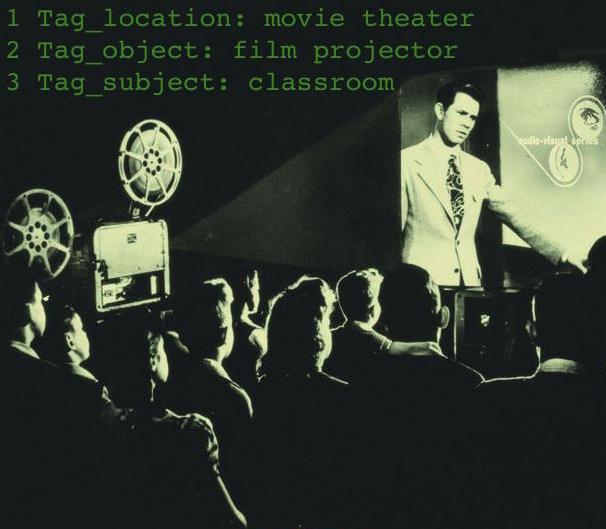 We are delighted to announce that the Knight Foundation has awarded a Prototype Grant for Media Innovation to The Media Ecology Project (MEP) and Prof. Lorenzo Torresani’s Visual Learning Group at Dartmouth, in conjunction with The Internet Archive and the VEMI Lab at The University of Maine. END_OF_DOCUMENT_TOKEN_TO_BE_REPLACED

We are excited to be working with the Databases and Information Systems Research (DBIS) Group that Heiko Schuldt directs, especially regarding the iMotion project that he co-directs, and look forward to future collaborations with The University of Basel’s impressive Digital Humanities Lab that Lukas Rosenthaler directs.

Thanks also to Dr. Claudiu-Ioan Tanase, a member of the Databases and Information Systems Research Group and iMotion team, who helped to organize the event.

Terrific response to our roundtable about developments in The Media Ecology Project as part of the fabulous DOMITOR conference in Stockholm (June 2016).  The roundtable especially focused on the pilot study of The Paper Print Collection at The Library of Congress, which involves many DOMITOR scholars.  The 2016 conference theme was “Viscera, Skin, and Physical Form: Corporeality and Early Cinema”.

Thanks to Prof. Tami Williams (The University of Wisconsin at Milwaukee) and Ph.D. student Allain Daigle (UWM) for participating in the roundtable with Prof. Mark Williams (Dartmouth College).

Look for more MEP news later this summer about a new and historically important resource regarding The Paper Print Collection that was agreed to at DOMITOR 2016!

Thanks much to Stéphanie Salmon at Fondation Jerome Seydoux-Pathé for utilizing historic archival data that MEP helped to rescue.  Proud to have played a role in this important film history data recovery and implementation, a process that began at the DOMITOR conference in 2014.

The data recovered is the work of Paul Spehr and the his late wife Susan Dalton, legendary figures in the film archive world.  The rescued information includes significant details about Pathé’s pre-1914 film releases, the period when it was arguably the most prominent and powerful motion picture studio in the world.

Special thanks to Dan Rockmore and The Neukom Institute for their support, and especially Mark Boettcher and Bennett Vance for cracking two locked hard drives and performing the data rescue.  We are at work to make a fuller set of the rescued data available as a public resource.

END_OF_DOCUMENT_TOKEN_TO_BE_REPLACED

Invited Lecture to Introduce MEP at National Library of Singapore, hosted by The Asian Film Archive

Grateful for the invitation from The Asian Film Archive to introduce The Media Ecology Project at this event at The National Library of Singapore in May, 2016.

Special thanks to Prof. Kristy Kang (The School of Art, Design, and Media at Nanyang Technological University) for serving as respondent to the lecture by Prof. Mark Williams (Dartmouth College), and for helping to coordinate the event. 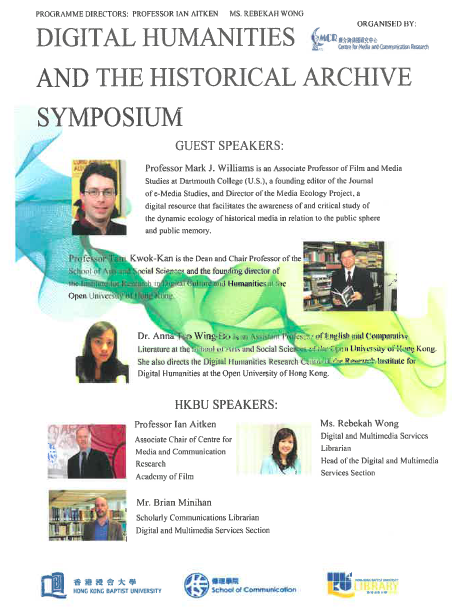 Digital Humanities and the Historical Archive Symposium (May 2016)

Grateful to have been invited to deliver a keynote talk about The Media Ecology Project at this exciting Digital Humanities event at Hong Kong Baptist University!

Thanks to Prof. Ian Aitken (HKBU) for this opportunity.  Grateful also to Rebekah Wong of the HKBU Library for her work with MEP on the Films Division of India pilot, and especially to Dr. Camille Deprez for her written contributions to that pilot study.

Looking forward to participating in this amazing conference co-sponsored by NYU and Columbia University. 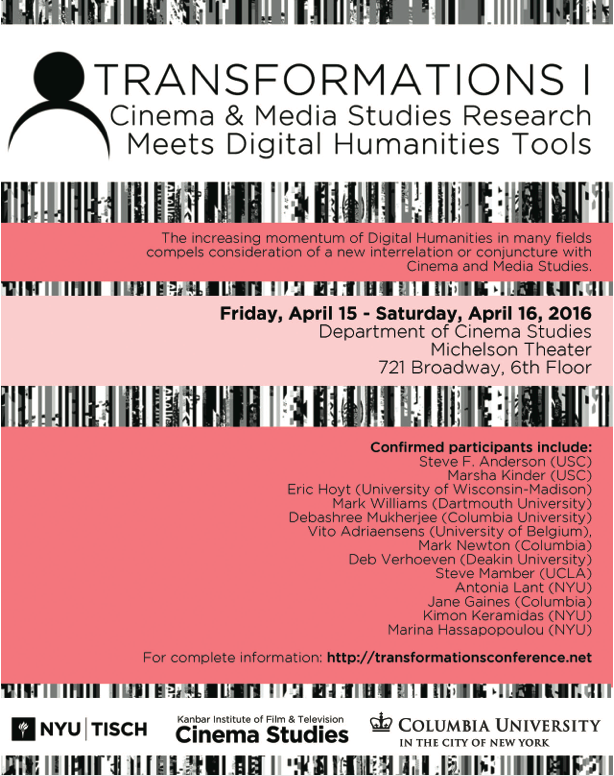 Proud to announce we have received an NEH Tier 1 Research and Development Grant from the Office of Preservation and Access to build a Semantic Annotation Tool (SAT).

The two-year grant begins Jan 1, 2016, and is also supported by Dartmouth College in myriad ways.

Special continued thanks to The Department of Film and Media Studies, Deans of Faculty and of Arts and Humanities, The Committee for Scholarly Innovation and Advancement, The Office of the Provost, The Neukom Institute, The Leslie Center for the Humanities, The Dartmouth College Library, and Information Technology Services at Dartmouth! END_OF_DOCUMENT_TOKEN_TO_BE_REPLACED

We are delighted to announce a pilot study in cooperation with The Films Division archive in Mumbai, India.

“The Films Division of India was established in 1948 to articulate the energy of a newly independent nation. For more than six decades, the organization has relentlessly striven to maintain a record of the social, political and cultural imaginations and realities of the country on film. It has actively worked in encouraging and promoting a culture of film-making in India that respects individual vision and social commitment.

In its archives, the Films Division of India holds more than 8000 titles on documentaries, short films and animation films.”