Onomy.org was the first stand-alone tool created by the Media Ecology Project. It was designed to facilitate small working groups who wish to share annotations across software platforms. It is a web service that allows collaborative development of taxonomies and folksonomies for use as controlled vocabularies. Onomy.org supports hierarchal categories and definitions, term suggestion and approval, and export in HTML, RDF, and JSON, and SKOS formats. It is used by scholars across the country as part of the Media Ecology Project, has been a key feature in a successful NEH grant application, and has played a role in courses taught at Dartmouth, Columbia, and elsewhere. 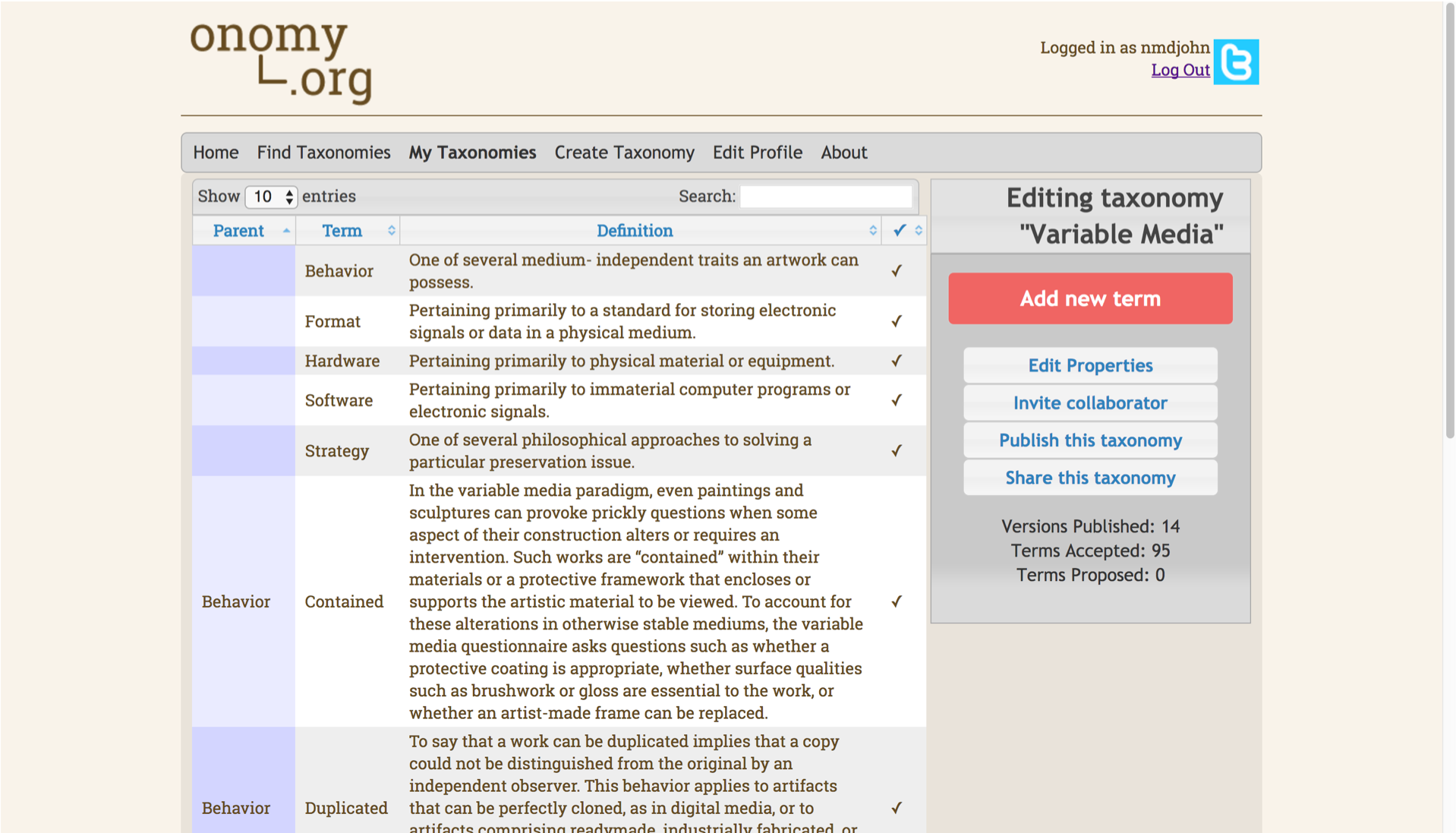 Shared vocabularies are a simple but integral aspect of the distributed toolset the Media Ecology Project is enabling. While full-text annotations are useful, full-text presents difficulties for certain computational analysis techniques like entity identification and topic analysis. Tags based on a shared controlled vocabulary enhance metadata and prepare annotations for a variety of network analyses in different software packages, increasing their value as a flexible knowledge resource. By creating a shared vocabulary that exists independent of any one analysis tool, Onomy.org creates a resource that allows many different tools to speak the same language and behave as a true read/write ecology across platforms.

MEP has both modified 3rd party software platforms to allow them to share annotations and integrated Onomy with our own annotation interface, Waldorf.js. The initially-supported platforms, Mediathread and Scalar, were chosen because they both focus on adding commentary to and displaying externally-linked media files rather than uploading files to a closed content management system.

The MEP metadata loop connects different components of the MEP toolset to each other and to host archives. For example, one instance of the metadata loop workflow might see a user find a video on the Library of Congress web site. They hit a bookmarklet that grabs the URL of that video and imports it into Mediathread, where they create annotations describing the video. When those annotations are made public, Mediathread updates the MEP Metaserver with them. Other users in Mediathread or Scalar that query that URL will be able to load their annotations and the Library of Congress can harvest them to update their own records on the file. Onomy.org plays a key role in facilitating the exchange of annotations by providing a persistent URI from which each application in the loop can download a set of vocabulary terms used to tag annotations.

Onomy.org was created with the generous support of the Neukom Institute at Dartmouth College.